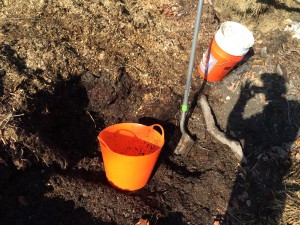 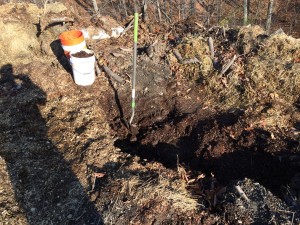 As I dug down into the lowest edge of the immense pile, shoveling the rich, crumbly clumps of dark brown manure near the Van der Werken’s horse barn two miles down the road, emptying shovelfuls into my nine buckets, I saw myself as one of those toiling gold miners in South Africa, mining along the terraces of the deep pit, toting buckets of ore up by hand. I myself was shoveling black gold, and I was lugging my buckets up into the back of my car, then dumping them all over my vegetable gardens, which are in need of some more nitrogen and organic matter.
I got four loads in at half an hour a load. It’s free for the taking, though I had a jar of my hardy kiwi jam to offer if I had seen the owner, who lets people come and take as much manure they want. He has neither the time nor an interest in composting and selling it, he told me last weekend. As I dug deeper, I opened up galleries in the pile, chasing veins of the blackest material. When I picked up my two-handled, rubberized plastic tote-buckets, carrying them against one hip, I thought of Walafrid Strabo in his 9th-century monastery garden on Lake Constance. In his Hortulus, the Latin poem he composed about his garden, he recommended adding “whole basketfuls of dung” to the soil. That phrase from a translation read 40 years ago stuck in my memory and foretold this day. It was warm enough to work without a jacket, and the low sun kept the  landscape lit up. To the south was the valley of Bennington and Mt. Anthony, our humble Mt. Fuji, its wooded top (which I have never climbed) flooded in clear light.  I spread the last loads of manure on the main garden as the sun dropped down behind West Mountain.

One thought on “Well-rotted horse manure”