I gave an illustrated talk a few weeks ago at the Green Mountain Academy, an adult education institute based in Manchester, Vermont. My subject was “Greece Α to Ω.¨ I greeted my audience in Greek: Καλησπέρα, και καλώς ορίσατε στην ακαδημία πράσινων βουνών. There being no Greek-speakers present, no one knew what I was saying, and if I alarmed then into momentarily thinking that my lecture was going to be delivered in Greek, so much the better. I asked if anyone had understood a single word. Someone bit (and I didn’t have to murmur “Anyone, anyone?” either): she recognized “academy.”

I explained that the word goes back to the original academy, which was Plato’s, located not in Athens proper but outside the city walls in an olive grove sacred to Athena, goddess of wisdom. 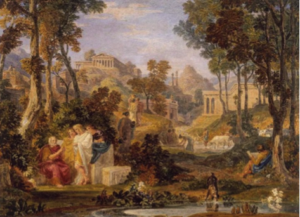 My point was that Plato’s school was located in a green world, like the academy at which I was speaking. The original groves of academe lasted from Plato’s time until 86 BC, when the Roman general Sulla made war on Athens and hacked them down in order to build siege engines. A single olive tree did survive, however, 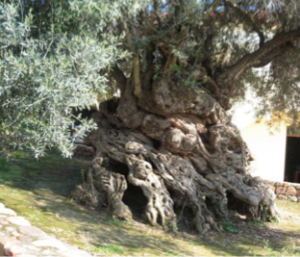 and olives can live 3000 years, like this one in Crete (at Vouves).

The Academy’s olive survived being crashed into by a bus in 1976, but one cold night in January, four years ago, when the Greek government had raised the tax on heating oil by some shocking percentage… 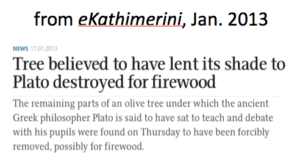 I was assuming that, among other things, my American audience wanted to know (as I put it to them) how ancient Greece, the font of democracy, science, and arts, came to be modern Greece, a country that seems to be in a perpetual state of crisis and dysfunction. I also figured (correctly) that many in the audience (mostly made up of boomers like me) had been to Greece as tourists and had had a wonderful time, and I promised to remind them why.

I ventured the opinion that above all Greece matters to Americans as the birthplace of democracy. The idea of government by consent of the governed, of equality before the law, of the dignity of the individual irrespective of wealth or birth, these ideas can be traced back to ancient Athens. “We are all Greeks,” said the poet Shelley in 1821, at the start of the Greek Revolution. His fellow Englishman and American patriot Thomas Paine saw the future of America in terms of a rebirth of Greek ideals. “What Athens was in miniature,” he wrote, “America shall be in magnitude.”

I reminded them that, as in Tom Paine’s America, democracy in ancient Greece did not extend to everyone, not to women or to slaves, and that the Golden Age of Athens did not last very long, and that our democracy has its troubles too, bigly, but the achievements of Periclean Athens are what still make Greece so symbolically important to us. Those Athenian ideals were in fact brought back to Greece – where there had been no democracy or freedom since Philip of Macedon defeated Athens and its allies in 338 BC – in the late 18th century from Western Europe, where their memory had been kept alive through the written word. It didn’t seem right to the thinkers of the Enlightenment that the Greeks should be in a state of bondage to the Ottoman Turks. They wanted to make Greece great again. “I dream’d that Greece might still be free,” wrote Lord Byron, who was to become a martyr to the Greek cause. And it did become free, or at least it became a kind of protectorate of the so-called Great Powers, England, France, and Russia, in 1830. For the Greeks themselves, ancient Greece has been, since that time, both a source of pride and a stick with which they have often been beaten for not measuring up.

That was my prologue. Then I came to “A” – which I will post tomorrow.