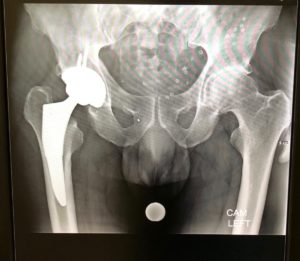 [I should have posted this three months ago, when I wrote it, but… I didn’t]

When I returned to Vermont three years ago after 20 years of teaching English in Greece, I was surprised to hear my old friends talking about new hips and new knees and who to go to for one or the other. I was a fit and healthy 65-year old, then, with no medical complaints except perhaps a little tightness in the groin on the right side when I got on or off my bicycle. My only contribution to the conversation was something to the effect that I would never choose go through with something like that.

I am scheduled – you saw it coming – for hip replacement surgery (on the right side) later this month. Degenerative arthritis, it had been going on for some time, it seems, but I may have made it worse when on my return I cleared the field of trees, again, and laid up all that firewood and went dancing with Amelia to the Dread Resistors at the Old First Church Barn in Old Bennington. They’re a great band, by the way. Amelia, she’s great too. I had to admit it: the body I had taken for granted all my life was showing signs of wear. The tightness was getting tighter, and there were flashes of pain or weakness. I began to limp. I tried cortisone shots and did get some relief, but the effect wore off, as I had been told it would.

So, I have a surgeon. One of my neighbors has one of his knees and is happy with it. I liked the way he put it to me after examining my x-rays: he said I was a candidate for hip replacement. That may be standard language, but (as my surgeon explained) it means that the decision to go ahead is on the patient. If I elect, I will have surgery.

So, here I am, trying out the walker lent to me by a friend (it’s like one of those nice shopping carts, but slower), and reading up on joint replacement on the good old Internet. I can still surf!

Maybe you saw the op-ed in the New York Times not long ago with the title “Can Your Hip Replacement Kill You?” (it was about inadequately tested medical devices). It gave me second thoughts, but they passed. My surgeon is a specialist, and you might as well just sign the consent form. I don’t remember “death” being on the list of warnings, but never mind. This year, more than 300,000 Americans will get new hips. I’m going to join the herd.

I never watched the Six Million Dollar Man, a TV series of the mid-1970s, but it goes like this: an astronaut crash-lands his re-entry vehicle, suffering life-threatening injuries, but NASA doctors are undaunted: “Gentlemen, we can rebuild him,” their leader says. “We have the technology.” And so they create the first cyborg or bionic man, composed of artificial limbs and organs, and the result is a being who is even “better, stronger, faster” than before. Soon there was a Bionic woman with her own series. Alexa, did the Six Million Dollar Man ever get married to the Bionic Woman? Yes, they got married in a movie in the 90s. In any case, science fiction has shown the way: the Times reports that one in ten Americans now has some kind of implanted medical device, from pacemakers and defibrillators to joints made of metal and plastic.

One in ten, and that’s not even counting devices attached to the outside of the body. Those go back to ancient Egypt, where it seems that a noblewoman was once fitted with a wooden big toe. A Roman general got a hook long before the Captain did, and the Rig-Veda, written in Sanskrit three thousand years ago, tells of Queen Vishpala who lost a leg in battle, was fitted with an iron prosthesis, by a pair of gods, and returned to the fight. She sounds like a good role model for me. Then there’s the Aztec god who had a foot made of obsidian to replace the one he lost in a battle with another god during the creation of the world. Or take the case of Nuada, a Celtic god who got a silver arm.

My new femoral stem will be made of titanium. Pistorius has carbon fiber calves and feet. Bionic hands are now controlled by nerve impulses from the brain. They are 3-D printing plastic limbs in war-torn Africa. The Internet tells of the coming fusion of technology, biology, and society. My right hip will be doing its part.

Edgar Allan Poe saw it all coming in 1839. That was the year he published his comic tale (comic, with a touch of the macabre) “The Man Who Was Used Up.” It’s a story about a man’s successful recovery, by means of prosthetics, from injuries sustained in one of the Indian Wars then raging in the South. Mary Shelley’s Frankenstein, of 1818, involves the creation of a human-like creature out of organic materials supplied by “the dissecting room and the slaughter-house.” Poe’s reconstituted man, like those of today, is the product of “mechanical invention.”

Poe’s tale turns on the attempts of the narrator to learn the story behind Brevet-Brigadier General John A.B.C. Smith. The General is introduced at a social gathering as “one of the most remarkable men of the age.” He is six feet tall with flowing black hair, magnificent whiskers, “large and lustrous” eyes, and other exemplary physical attributes. But such physical perfection doesn’t, it seems, adequately account for the somehow mysterious impression Smith produces.

“There was a primness, not to say stiffness, in his carriage; a degree of measured, and if I may so express it, of rectangular precision, attending his every movement.”

A friend whispers a few words in the narrator’s ear about the General’s reputation for courage:
“Showed that, I should say, to some purpose, in the late tremendous swamp-fight with the Bugaboo and Kickapoo Indians. Bless my soul – blood and thunder and all that – prodigies of valor – heard of him, of course? You know, he’s the man –“ And here comes the first of many interruptions in the middle of this particular phrase, and the solution to the mystery remains unspoken.

The narrator gets a chance to chat with the General himself, who turns out to be a most fluent talker and a man of the greatest general information, one of whose favorite topics is the “truly useful mechanical contrivances daily springing up like mushrooms — or grasshoppers – around us.” But what happened during the Bugaboo and Kickapoo campaigns is left unsaid.

The narrator plies his inquiries among his other acquaintances, all of whom remark on the savageries of the Indians and the progress of mechanical invention, but who are always interrupted after the words “why, he’s the man…” – until the frustrated narrator calls on the General directly at his residence. Pleading urgent business, he is shown into the bedroom as the General is about to dress, or rather be dressed by his valet.

But the General is not in sight, and when the impatient visitor kicks a “large and odd-looking bundle” on the floor, a voice “between a squeak and a whistle” protests the indignity, then orders, “Pompey, bring me that leg.” The servant brings over a “capital cork leg” and screws it in.

As the strange voice reflects on the “bloody action” of the Bugaboo and Kickapoo affair, where a man shouldn’t think of “coming off with a mere scratch,” the voice also asks for his other parts to be brought and attached, and so they are, like “the drawing on of a stocking.” Meanwhile, this artificial man-in-progress offers medical endorsements. “Thomas is decidedly the best hand at a cork leg, but if you ever want an arm, my dear fellow, you must really let me recommend you to Bishop.” And so it goes through hair and teeth and eyes (because “those Kickapoos are not so very slow at a gouge”), as the narrator watches in astonishment.

The final touch is “a singular looking machine” that is inserted into the General’s mouth. Immediately come the words, delivered in a voice of “melody and strength,” “Damn the vagabonds! They not only knocked in the roof of my mouth, but took the trouble to cut off at least seven-eighths of my tongue. There isn’t Bonfanti’s equal, however, in America, for really good articles of this description.” The mystery now solved, the narrator spells it out for us: “Brevet-Brigadier General John A.B.C. Smith was the man – was the man who was used up.”

Literature is equipment for living, said Kenneth Burke. No surgery required. Having now put myself in the General’s shoes, I don’t feel so bad. It’s just a used up hip. Lighthart will make me a new one.