Ε – Epsilon is for Europe

Never mind what you learned in school, Europe isn’t really a continent, it’s just the westernmost part of the landmass of Eurasia. It’s above all an idea that has been in flux since the time of Herodotus. 60 years ago, Europe became an Economic Community, joined by Greece in 1981, and later, in 1993, it became the European Union with broader purposes. It pioneeered the euro currency in 1999, which Greece adopted in 2001.

The EU is a bold experiment, and overall I would say it’s been successful, especially compared to the disaster of the first half of the European 20th century. The EU is now made up of 28 countries (many of them former adversaries at one time or another), with 23 different official languages, with different national histories, but 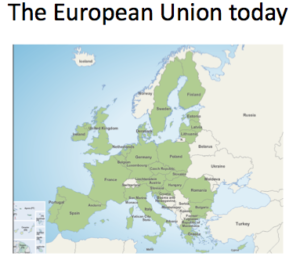 with enough of a common cultural past to induce member states to give up some of their sovereignty in order, for one thing, to stand up to the other economic heavyweights of the world – and also not to fight each other any more. Former French president Giscard d’Estaing spoke of the “Dream of Europe. Let us imagine a continent at peace, freed of its barriers and obstacles, where history and geography are finally reconciled.”

Economic and political union hasn’t been easy, and it may not last (witness Brexit), but (with the exception of a contained fire in the Balkans in the 1990s), the center has held. Greece, dangling down there in the SE corner, is both at the periphery (the strategic periphery) and – thanks to ancient Athens – also at the center of the Europe. As we in this country know so well, e pluribus unum is forever a work in progress. The majority of Greeks want to remain in the EU. Whether they’ll retain the common currency is another matter.