I guess I should explain the woodpiles. I have 21 of them. I counted them today, taking as one pile one stack of firewood piled 3 to 4 feet high on rails with cribbing at both ends, that is, with towers of half-round, cross-piled logs to bookend each pile. Each stack contains one-third to one-half cord of wood, so I figure that I have at least 8 cords on hand. That is what I should have: 4 to burn this winter and 4 to season for next year. 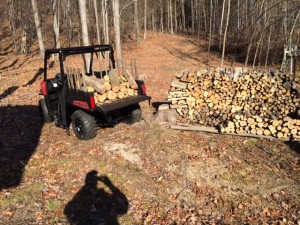 Last week I visited the man who grew up on the farm of which these 23.5 acres were a modest part. In his boyhood (be was born in 1925) this land, now mostly woodland, was pasture for sheep and cows. The woodlot was elsewhere on the property, and they took 30 cords of firewood out of it each year: 10 for the family house, 10 for his grandfather’s house across the road, and 10 for sugaring. His father always had it stacked a year ahead of time, too. He would have had nearly 60 cords laid up at this time of year, which puts my 8 cords in perspective. All that wood would have been cut before chain-saws and splitters, moreover. I do split with a maul myself, but my woodpiles are child’s play compared to the cords of the past.

I am not much of a quant, but let me do a little arithmetic. My woodbox holds roughly 40 pieces of firewood. It’s 10 or so cubic feet. That works out to 500 pieces of firewood per cord. That means I have cut, split (as needed), and stacked around 4000 pieces of firewood since October of last year. I had to cut most of those trees down anyway, and the biggest ones, an oak, a black birch, a red maple, and two beeches, had outgrown their welcome in the backyard.

I have come to know my wood well during these encounters. When a cord and a half gets stacked on my front porch over Christmas (I am expecting the help of elves), I imagine playing the 16-foot-long pile like a xylophone, according to the day’s needs: selecting a fanfare of split red maple for the first fire of the morning, then variations on the theme of heat with maple rounders or pieces of black birch, giving way to well-seasoned oak or (depending on the temperature outside) a riff of hot-burning hornbeam, and then in late afternoon, when the fire has died down, a piece of popple or paper birch to quickly reignite it for the evening burn.

Every man looks at his wood-pile with a kind of affection.  I love to have mine before my window, and the more chips the better to remind me of my pleasing work.

Everyone who heats with wood knows who wrote those words. The guy had a small house by a pond, and an open hearth instead of a stove. And he too used his wood strategically:

Hard green wood just cut, though I used but little of that, answered my purpose better than any other.  I sometimes left a good fire when I went to take a walk in a winter afternoon; and when I returned three or four hours afterward, it would be still alive and glowing.  My house was not empty though I was gone.  It was as if I had a cheerful housekeeper behind.  It was I and Fire that lived there.

I too can see, and smile at, some of my piles out the kitchen window, but I haven’t developed that same intimacy with this not-yet-arrived winter’s god of fire yet, especially during the sweet, mild December days we’ve been having lately. It is 6 pm, and the biscuit fire I laid this morning has long gone ou 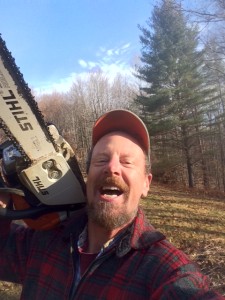 t. I may or may not light another one this evening. But I remember how close I felt to Fire last February. That was more like survival than housekeeping, though. I am ready!