Did I say tomorrow? I meant today. A is for Arrival (and άφιξη, in Greek).

When my family and I arrived in Greece in late August, 1995 – it was the first time for all of us – we were greeted at the Thessaloniki airport and put in a cab that would to take us to our quarters on the campus of Anatolia College just outside the city. We joined the main road and got behind an old pickup whose cargo area was completely covered by canvas stretched over a frame, with the following letters printed across the back: 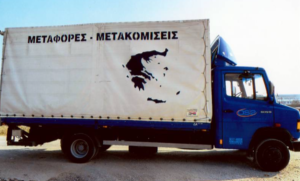 Metaphors! A truck full of… metaphors? What could that mean? I puzzled over it as we passed yellow fields burnt by the sun, with intensely green trees standing in the middle of those fields or in small groves on the hillsides. They were olives, though I didn’t know it yet. As the truck turned toward the city, a gust of wind parted the canvas – to reveal… a huge load of watermelons. Off they went to markets and street corners in central Thessaloniki, and off we went, a lesser load of four Americans, toward our new home on a slope rising eastwards above the city. As for ΜΕΤΑΦΟΡΕΣ, I solved the riddle, thanks to my acquaintance with a 16th-century treatise on English poetry, in which “metaphor” is called “the figure of transport” (since it carries one meaning over to another).

So you see my introduction to Greece came by way of this invitation to think poetically about life there. The truth is, I was predisposed to it. We all are. How do most of us first encounter Greece? Through myths, if I’m not mistaken. And symbols, like the image of the Parthenon that the Green Mountain Academy used to advertise my talk and that appears in American social studies books in junior high school. I recall reading (in a later book) that Alexander the Great carried a copy of the Iliad with him on his conquests; he kept it, and a dagger, under his pillow at night as he crossed Persia. He imagined himself as another Achilles. He was living his myth, just as a campaign by the Greek National Tourism Organization was encouraging me to do more than two millennia later.

The sociologist Max Weber said that man is an animal suspended in webs of significance he himself has spun. He also held that “All knowledge of cultural reality … is always knowledge from a particular point of view.” This little “A to Ω” (thank you, Jesus) reflects my own.